Full Name
Kyle Walker
Job Title
VP of Technology
Company
Weigel Broadcasting Co
Bio
Kyle Walker is the VP of Technology for Weigel Broadcasting Co based in Chicago, IL.  Weigel owns and operates stations in nine markets, including Chicago, where the company is headquartered.  In addition to terrestrial stations, Weigel was one of the first mainstream diginet operators that began national distribution in 2008.  Today, Weigel operates MeTV, H&I, Decades, with FOX Television the Movies! network, and with CBS Television the Start TV network.

Kyle began with Weigel Broadcasting in 2002.  Kyle was instrumental in standardizing many of the operational practices used in diginets today.  Prior to that, Kyle was the Director of Projects for the former ACME Television stations.  Kyle resides in the Chicago area and is the father of 4 children. 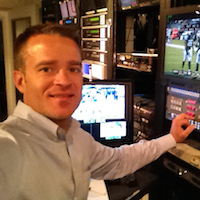