Full Name
Ken Rubin
Job Title
Vice President of Worldwide Sales
Company
Vela
Bio
As Vice President of Worldwide Sales, Ken Rubin provides Vela compliance monitoring and logging solutions throughout the world. Having recently become the US-preferred Volicon-replacement system at 250 US TV stations including all stations in many of the top 20 US station-groups, Ken has worked closely with senior news and engineering management to define innovative new features now delivered by Vela products that have raised the bar and defined a new breed of systems considered Smart Loggers.

Ken began his nearly 30-year career in broadcast technology sales as somewhat of a pioneer creating and selling turnkey nonlinear editing systems before becoming one of the top Avid sales performers throughout most of the 90’s. He spent nearly a decade at Volicon after becoming a founding sales partner and was instrumental in defining the compliance monitoring and logging marketplace before the company was sold to Verizon.

After approximately 2 years each managing sales at Grass Valley and Telestream, Ken joined Vela to help fill a void in the compliance monitoring and logging space where broadcasters were demanding better support, better value, and next-generation features that allowed them to leverage what was basically an Engineering tool and enhance it to become a facility-shared unified platform that delivers value to nearly every department, especially News.

Ken was raised in the Washington, DC area, attended George Mason and Villanova, and lived in Philadelphia and Atlanta before moving to Florida in the late 90’s. Ken and his wife Sacnyte have girl-boy twins named Luna and Apollo and recently added younger sister Kalani, giving them ‘the Moon’, ‘the Sun’, and ‘the Heavens’. 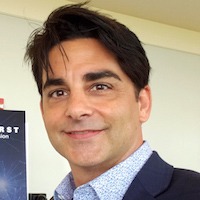